Robust domestic demand in Indonesia and the Philippines are contributing to an improved outlook of 5.1% growth this year for Southeast Asia, according to the latest forecasts from the Asian Development Bank (ADB). In April, ADB projected a 4.9% economic growth in 2022.

However, weaker prospects for global demand have led to a downgrade in the forecast for next year to 5.0% from 5.2%.

ADB released the Asian Development Outlook (ADO) 2022 Update this week. It again lowered its forecasts for economic growth in developing Asia and the Pacific, amid mounting challenges that include increased monetary tightening by central banks, fallout from the protracted Russian invasion of Ukraine, and recurrent COVID-19 lockdowns in the People’s Republic of China (PRC), the region’s largest economy. 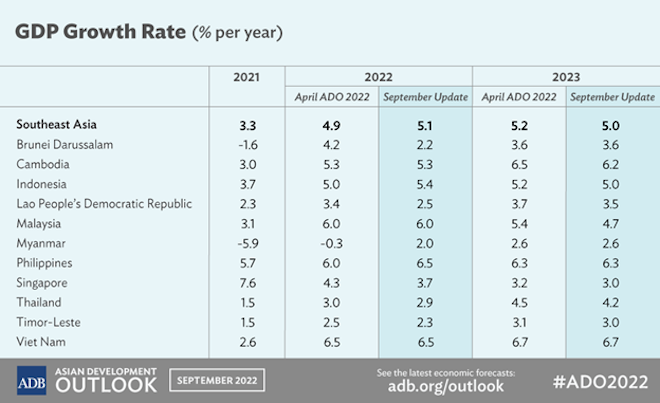 “Developing Asia continues to recover, but risks loom large,” said ADB Chief Economist Albert Park. “A significant downturn in the world economy would severely undermine demand for the region’s exports. Stronger-than-expected monetary tightening in advanced economies could lead to financial instability. And growth in the PRC faces challenges from recurrent lockdowns and a weak property sector. Governments in developing Asia need to remain vigilant against these risks and take the necessary steps to contain inflation without derailing growth.”

The world’s major advanced economies are forecast to grow 1.9% in 2022 and 1.0% in 2023, slower than projected earlier this year. High inflation has prompted the United States and the euro area to aggressively tighten monetary policy, weakening demand in these economies, which also continue to be affected by supply-chain disruptions and uncertainty from the invasion of Ukraine.

ADB raised its forecast for inflation in developing Asia this year to 4.5% from a previous projection of 3.7%. The forecast for next year is 4.0%, up from 3.1%. While inflation in the region remains lower than elsewhere, supply disruptions continue to push up food and fuel prices.

Continuing supply disruptions because of the war in Ukraine, higher commodity and food prices, and higher global interest rates will also accelerate inflation in Southeast Asia this year to 5.2% from 3.7% in the April forecast. The projected inflation for next year was also adjusted to 4.1% from 3.1%. The current account surplus will likely narrow this year, ADB said.

ADO 2022 Update expects domestic demand to remain strong for Indonesia through the rest of this year, despite higher inflation. Demand for commodity exports has also been healthy, supporting growth and generating a fiscal revenue windfall.

The first half of the year for the Philippines was stronger than expected, said the ADO 2022 Update. Spending on recreation, travel, and restaurants bounced back in the first six months, with household consumption rising 9.3% from 0.9% in the first semester of 2021. It was the most significant contributor to gross domestic product (GDP) growth in the period.

Services output grew 8.7% in the first half, with a broad-based expansion noted across the sector. This contributed to a steady increase in overall employment, with an additional 5.7 million jobs generated from July 2021 to July 2022, two-thirds of which were in services, mainly in wholesale and retail trade.

The Philippines’ GDP will grow 6.5% in 2022, the same as forecast in July but up from the April forecast of 6.0%. The growth projection for 2023 is kept at 6.3% as monetary policy tightening and accelerating inflation both crimp domestic demand.

This article was first published by BIMP-EAGA on 23 September 2022.

Tired of Monotony and Hungry for Career Change, Tech Newbie Learns to Code

How Southeast Asia Can Benefit from the Metaverse