How COVID-19 Is Spurring Digital Transformation

When Vanessa Teo, founder and CEO of agritech startup Agrome IQ, saw farmers in Brunei Darussalam were unable to sell their produce due to government measures against the coronavirus disease (COVID-19), she decided to launch an online marketplace to help farmers sell to consumers.

“With the portal, farmers can focus on farming,” says Teo at the LiveX webinar organized by BIMP-EAGA’s ICT Cluster, National ICT Confederation of the Philippines, and ICT Davao, Inc. on 30 June. Teo has been working with farmers for the past 3 years through Agrome, which developed a smart farming platform that helps farmers manage their farms more efficiently, in turn, improve their yield and the quality of their crops.

Agrome set up the portal in a matter of weeks. Brunei Darussalam first reported its first confirmed COVID-19 case in March and consequently implemented measures to contain the virus. By April, Agrome launched the portal, agromemarket.com.

Agrome’s e-commerce push to help farmers is just one of the digital initiatives that had mushroomed around the world as a direct response to COVID-19.

Growing digital trend in the wake of COVID-19

Thomas Abell, chief of the Digital Technology for Development Unit of the Asian Development Bank (ADB), says COVID-19 is accelerating the trend toward the digital economy. “Remote work solutions are now urgent in organizations that didn't think they would have to address this for years. Use of e-commerce for delivery of food and goods is now urgent when people are unable to get out. Digital payment is now urgent for governments that are now trying to provide relief to their populations,” he says at the webinar, Improving Digital Access and Connectivity to Support People and Businesses Through COVID-19 & Beyond, which ADB hosted on 19 June.

He adds, “E-learning is now urgent as families that never imagined their kids would be banned from going to school are now trying to figure out how to help their kids get educated online. Digital healthcare solutions are now urgent and doctors are now realizing they need them to be able to serve their patients where possible.”

Abell also notes a boom in online gaming and video entertainment as people stayed in after governments imposed lockdowns.

The rush toward the digital economy in the wake of COVID-19 is also seen across BIMP-EAGA.

In April, the Brunei government launched online e-commerce directory, eKadaiBrunei.  The directory lists online grocery stores, department stores, delivery systems, and payment platforms, among others. The government hopes Bruneians would see e-commerce as a safe and convenient way to do business amid the pandemic.

In June in Indonesia, the government teamed up with e-commerce platform Lazada to help 2 million small- and medium-sized enterprises (SMEs) go digital. While the move is part of continuing efforts to encourage SMEs to embrace e-commerce, authorities believe the program has become more urgent due to the COVID-19 pandemic.

Authorities in Malaysia also see urgency in moving toward the digital economy. The Sabah government last month came out with a stimulus package worth 240 million ringgit ($56.2 million), which entails boosting its digital economy amid the pandemic. The package includes initiatives to encourage businesses to go digital.

Also in June, the Mindanao Development Authority (MinDA) in the Philippines launched online portal mindatienda.com to help Mindanao’s farmers and fishermen connect with consumers in other parts of the country. MinDA hopes the portal would help farmers and fishermen recover from the adverse effects of the pandemic.

Businesses in the subregion have also jumped on the digital bandwagon. During the LiveX webinar, Widiyanto Saputro, chairman of the Arum Bumi Group of Indonesia, and John Carlo Tria, president of the Davao City Chamber of Commerce and Industry in the Philippines, note that SMEs have realized the need to use e-commerce as a way to do business amid the pandemic.

Widiyanto says COVID-19 has made business owners realize the importance of going digital. “So many enterprises—maybe all of them—are now trying to go digital to sell their products and services. They realized that if they don’t go digital, they will die.”

Tria notes that as early as April, several companies in Mindanao migrated to digital platforms to mitigate the impact of the outbreak. Because they were able to make the shift early, these businesses were able to make a head start as restrictions began to ease and they started resuming operations, he says.

Before the outbreak, studies already show increased opportunities from e-commerce. A 2018 report from Google and Temasek projected that Southeast Asia’s internet economy could grow to $240 billion by 2025 from $72 billion in 2018.

Connectivity as a necessity

With COVID-19 accelerating the trend toward the digital economy, Abell says “connectivity should be recognized as a basic necessity.” This is especially true for Asia where high growth rates and relatively low rate cost structure make investments more feasible.

The International Telecommunications Union (ITU), a United Nations body that looks at ICT issues, estimates that at the end of 2019, 53.6% of the global population, or 4.1 billion people, use the internet.

According to ASEAN statistics, member states saw a rapid rise in the number of internet users in recent years. As of 2018, internet coverage in ASEAN reached 53.4 per 100 population, with BIMP-EAGA members Brunei Darussalam and Malaysia among countries recording the highest coverage, at 94.6 and 81.2 subscribers per 100 population, respectively. Indonesia and the Philippines, on the other hand, have a longer way to go. BIMP-EAGA targets 100% broadband coverage by 2025. BIMP-EAGA was established in 1994 to boost development in remote and less developed areas in the four member countries. 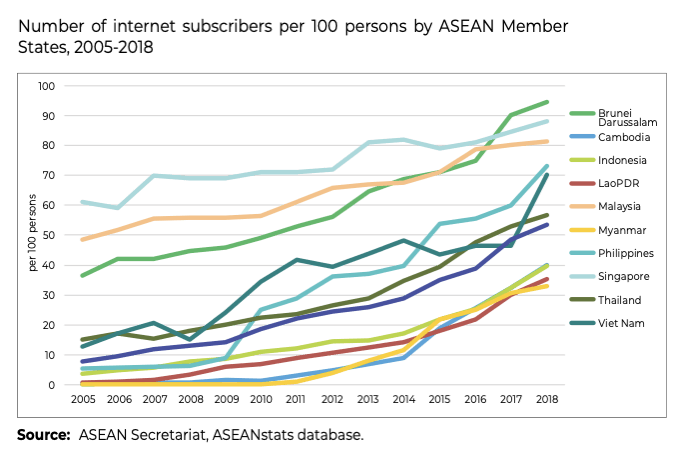 Citing the ITU data, Abell says, reaching the remaining 46% will be slower and more difficult due to issues like affordability, digital literacy, and gender, language and cultural barriers.

Investing in broadband infrastructure is also a challenge, particularly in remote or underserved areas, which typically have low-density and low-income populations. This means there would be more infrastructure cost per user and less revenue potential for telecoms companies.

The good news is there are emerging technologies and opportunities that can improve access and coverage.

Jio initially offered the service for free for 6 months and sold mobile phones costing only $25 or $50. Because the service was affordable, Jio was able to grow its subscribers to 400 million in 3 years.

Reliance also built Jio as a 4G network, eschewing 2G or 3G support, which would have cost the company more to build. Reliance invested $22 billion in Jio, but it is now valued at $65 billion.

Abell says one of the technologies ADB is watching for possible application in remote areas in Asia, particularly in island nations, like those in the Pacific and BIMP-EAGA is the low-earth satellite system developed by American space company SpaceX founded by Elon Musk.

Called Starlink, the broadband satellites are designed to beam internet directly to terminals set up by users. Starlink’s website said the technology can deliver high-speed broadband internet to locations where access has been unreliable, expensive or completely unavailable. Starlink targets to launch the service in the United States and Canada this year, and globally by next year.

Abell also welcomed how Google Translate has added more languages to the service, in turn, improving its usability.

At the LiveX webinar, Atty. Samuel Matunog, president of ICT Davao, Inc., stressed the importance of adding multilingual features in apps and other digital platforms to encourage more people using them.

Transitioning into a disruptive world

Tria warns while businesses try to build resilience against the pandemic, they should also brace for more disruptions. “We now have actually transitioned into a disruptive world. The world of the 1990s is no longer what we are looking at. And the quality of our economy will definitely shift into a world where digital-only interactions will be a necessity rather than a luxury.”

While there is more awareness about the importance of going digital, people should realize that digital transformation is going to be a big part of this new normal, he says. “We can't continue to operate under the old system. The opportunities being provided by digital transformation and digital connectivity allow us to do more business… It’s vital that we take stock of the opportunities and the kind of solutions that will fit our needs.”

This article was first published by BIMP-EAGA on 16 July 2020.

Addressing the Digital Divide in ASEAN