Asia-Pacific Trade and Investment Trends 2021/2022: Preferential Trade Agreements in Asia and the Pacific 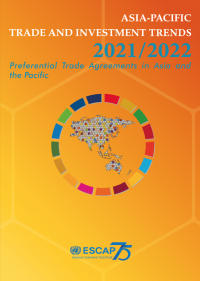 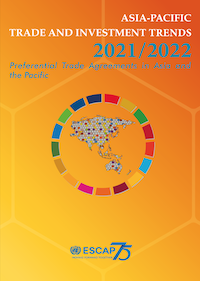 About half of the preferential trade agreements (PTA) in force worldwide were forged by countries from Asia Pacific, making the region a major contributor of such deals, says a new report from the United Nations Economic and Social Commission for Asia and the Pacific (UNESCAP).

The report provides an overview of the initiatives and approaches of Asia-Pacific economies toward PTAs, including recent trends and developments.

UNESCAP notes that as of November 2021, there are 195 PTAs in force worldwide, 19 signed and pending ratification, and 97 under negotiation, with at least one party from Asia Pacific.

The Regional Comprehensive Economic Partnership (RCEP), signed by ASEAN member countries plus four non-members, is one of the mega-trade agreements in place. The RCEP will take effect on 1 January 2022.

Most agreements that have been signed since 2020 onward go beyond trade in goods to cover additional areas such as services, e-commerce, and climate action.

Digital trade agreements have increasingly become a part of new-generation trade agreements since 2019 in the wake of growing links between digital technology and trade. As of 2021, there are five digital trade deals in place, all of which involve Asia-Pacific countries, particularly Singapore.

What Will It Take for Southeast Asia to Build Back Better from COVID-19? Go Green

Towards Reducing Single-Use Plastics in Lao PDR: Options for a National Policy Strategy and Action Plan

Developing the Philippine Blue Economy: Opportunities and Challenges in the Ocean Tourism Sector

Asia's Journey to Prosperity: Policy, Market, and Technology Over 50 Years

Impact of the COVID-19 Pandemic on Trade and Development: Transitioning to a New Normal